The IRS challenged the way that three related Virginia historic rehabilitation tax credit syndicates (the “Funds”) reported the Funds’ transactions with investors (the “Investors”).  The U.S. Tax Court found that the Funds had properly reported the transactions as tax-free capital contributions.  Reversing the Tax Court, the Fourth Circuit held that the Funds had engaged in taxable sales of property and that the Investors lacked the entrepreneurial risk of true partners. 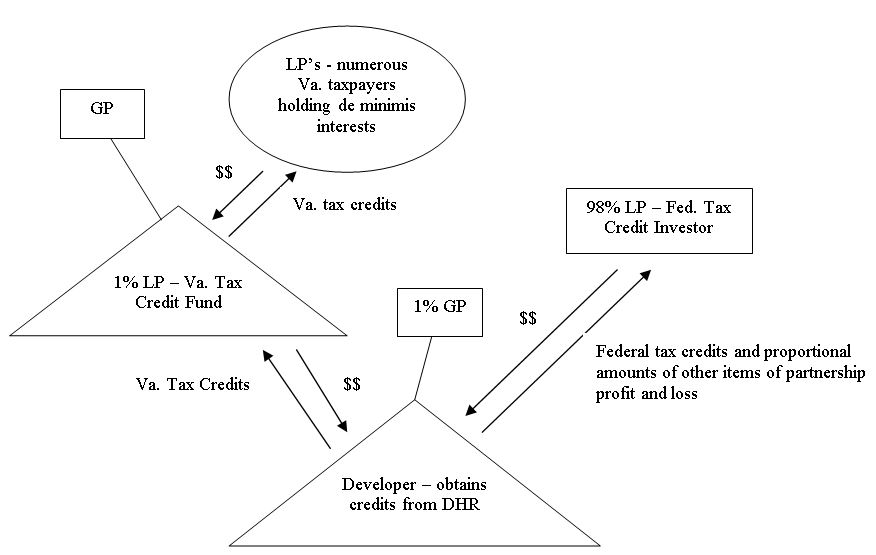 The Funds’ offering memoranda and partnership agreements explained that Investors should not expect to receive more than negligible allocations of income or loss from the Funds.  The Funds would only invest in Developers holding completed projects entitled to credits, substantially eliminating the Funds’ risks that they will have the Virginia Tax Credits to allocate to their partners.  The Funds would receive reimbursements of their investments if any of the Developers failed to receive and properly allocate Virginia Tax Credits or if DHR revoked the Virginia Tax Credits.  Thus, the offering memoranda and partnership agreements made it evident that Investors’ risk of loss was insignificant.

IRS Recharacterizes the Relationship of the Funds and Investors

The IRS audited the Funds and recharacterized the payments of $6.99 million from the Investors to the Funds.  The IRS’s position was that the Investors had not made capital contributions and were not partners of the Funds.  The IRS believed that, even if the Investors were partners of the Funds, the transactions with the Funds should be reported as taxable sales of state income tax credits to the Investors under Internal Revenue Code §707.  Code §707 governs sales and other transactions between partnerships and partners.  The Funds and the IRS stipulated that, if the IRS’s recharacterization of their relationship was correct, the Funds should have reported income of $1.53 million rather than losses of $3.28 million.

Funds Engaged in Taxable Sales of the Tax Credits to Investors

The Fourth Circuit did not provide a roadmap that Virginia Tax Credit syndicates can follow to avoid IRS scrutiny.  At the very least, Virginia Tax Credit syndicates such as the Funds will have to consider whether they want to report investors’ payments as taxable income from the sale of property or dramatically restructure themselves to avoid the presumption of a disguised sale under Code §707.  If they choose the latter, they should question whether they can make disproportionately large allocations of Virginia Tax Credits to partners with negligible economic interests in the venture.  They should also question whether they can provide guarantees that diminish the partners’ entrepreneurial risk to a negligible amount.

It is important to note that the disguised sale rules under Code §707 generally recharacterize transactions between partners and partnerships.  Therefore, a party can be a partner in the partnership and still have a transaction recharacterized as a purchase or sale of assets.  Accordingly, extending the time during which the Virginia Tax Credit investor remains in the partnership, or a similar modification to the arrangement, likely will not remedy the result reached by the Fourth Circuit.

We will continue to evaluate and monitor developments with this case and the issues it presents.

For more information about this topic, please contact the author or any member of the Williams Mullen Tax Law Team.