01.30.2018 Albo's Rules: Former Virginia Delegate Dave Albo Distills Almost a Quarter Century of Legislative life Into 11 Rules You Can Use to Make Your State the Best Place in America! By: Hon. David B. Albo 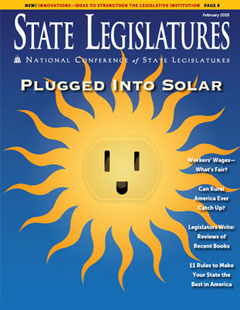 Note: This story was originally published in the February 2018 edition of State Legislatures Magazine. To read the original article, click here.

After 24 years of service as a member of the Virginia House of Delegates, I decided it was time to retire. During the comments about my retirement on the House floor, I heard people refer again and again to “Albo’s Rules.” I didn’t realize I had more rules than Major League Baseball. But I guess I did!

After serving on the House Courts of Justice Committee (the judiciary committee in most other legislatures) for two decades, and serving as its chairman for the past 12 years, perhaps it was inevitable that I developed these “rules,” though I like the term “best practices” more.

1. There are no special people.

Never start down the path of passing laws that treat one group of people better (or worse) than others. If the law is a good law, then it should apply equally to everyone or apply to no one. Every time you pass a law making a classification of people special, you are demeaning everyone else in the state who is not in that group. Also, as soon as you make one class of people special, then everyone else wants the special status. Over and over you will hear, “Why does group X get it and we don’t? Are we second-class citizens?” One of the best examples is enhanced penalties for assault and battery. We, the Virginia Legislature, mandated extra punishments for the crime of assault and battery when the victim is a police officer. First, the judges wanted this special status, then the correctional officers wanted it, then the firefighters, then the volunteer firefighters. (“We are volunteers, why is it a more serious crime to assault a paid firefighter than a volunteer firefighter? We do exactly the same thing—but for free!”) Every year there was a new group feeling snubbed by their exclusion from the law: The EMTs were next, then the teachers wanted it, then the bus drivers, then the referees … you get my point. If the penalty for assault and battery is too weak for police, it is too weak for everyone.

2. If you don’t understand it, it’s likely some other legislator doesn’t either.

I have always been willing to raise my hand and admit that I don’t understand what people are talking about. It is not embarrassing when you realize that if you don’t get it, there’s probably another legislator who doesn’t get it either but is afraid to admit it! Citizens and lobbyists making presentations to legislators assume we know everything. We don’t! They are experts on their one issue. We deal with thousands of issues and need to be educated. I have often stopped a committee meeting, raised my hand and admitted, “I have no idea what you are talking about.” In my “real” life, I am a criminal and traffic defense attorney. I know all there is to know about DUI, larceny, illegal drug law, etc. But I don’t know anything about specialized issues that haven’t been applicable in my life, such as nonpoint source pollution, or dog hunting rules, or car title lending rules. The list goes on and on ...

3. When describing something, use language an eighth-grader would understand.

Once we understand what we want, we can turn it into legal language for the code. Too many times, we lawyers in the legislature get caught up in the wherefores and the notwithstandings. Blah, blah, blah. It is much better just to talk like a regular person first, hash out what you are looking to do, and then write the law. A good example was when we drafted internet-oriented criminal laws. Instead of starting with the legal mumbo jumbo, where we would get all lost in the terms describing the technology and the legalese, we stepped back and just talked like regular people sitting around drinking a beer. Once we all understood what we were looking for, then we started drafting the law.

Remember, a court will interpret a law assuming legislators deliberately chose every word in it. “Which” was changed to “that” in a bill I worked on years ago. Someone thought the words were interchangeable. But “which” is used with nonessential (or nonrestrictive) clauses that can be deleted without altering the meaning of the sentence. “That” is used for essential clauses that, if eliminated, could radically change the meaning. The differences are nuanced, but important.

6. If you make a list, you better include everything you want.

More intellectually stated that’s, Inclusio unius est exclusio alterius. In eighth-grade language it means, “In a list, anything that is excluded is deemed intentionally excluded.”

7. It is easy to stomp something out; the hard part is making sure you don’t catch other unobjectionable behavior.

This might be the most important rule. When you are trying to stop something, make sure you don’t go overbroad and include innocent behavior. A good example is passing a law to stop sexting. You want to stop an adult male from taking naked pictures of his minor girlfriend and then sending the pictures to all of his buddies. So, you pass a law that basically says, “It shall be production of child pornography (subject to years of mandatory prison time) to knowingly transfer on the internet a naked picture of a child.” It sounds great, and you can put it on your brochure! But while you just put the creepy 50-year-old guy in prison for a decade and put him on the sex offender registry for his entire life, you also cast the net too wide. How? You just also sent to prison and put on the sex offender registry the 16-year-old girl who took a picture of her own breast and texted it to her boyfriend. Yes, in Virginia prosecutors have charged kids with production of child pornography for taking photos of their own bodies and texting them out.

8. Never trust the “Even if the law technically says that, we would never do it” argument.

As stated above, words matter. If a law cannot be written to stop the net from being cast too wide, don’t pass it under the promise that no one would pursue an absurd result. I remember back in the ’90s, we passed a law making it a felony for a person to commit a battery on a police officer. We all thought about the guy walking up to an officer and attacking him, causing bodily injury. At the time we were writing the law, one delegate asked, “What about when a person is being arrested? That is an uncomfortable thing, and he may wave his arm around to avoid being cuffed and touch the arresting officer. Remember, in a battery, no injury is required.” The prosecutors and police lobbying for the bill all said, “We would never charge that!” Well, 20 years later, it happens all the time. Police get angry at a defendant who does not comply nicely, and they charge him or her with the felony. The prosecutors then bring the charges in court—even when the police officer was not physically injured in the least bit.

Often legislators want to have their own name on a bill to stomp out some vile behavior. And public interest groups want to pass laws they generated so they can tell their members they accomplished a great thing. But often what they want to do is already the law! The only fault is that the legislator or the public interest group can’t say that they did it. Whatever you do, don’t write another law. The courts will think that there was some fault with the original law, and you will end up creating more problems.

10. Not every law needs to be passed this year.

Wait until it’s right. As my friend and colleague Delegate Terry Kilgore often tells fellow Virginia delegates and senators, “The Virginia legislature has been around for 398 years without your law—I bet it can survive another year.” He says this because words matter and laws sometimes have unintended consequences. There should never be a rush to pass a bill just to pass something.

11. When you retire, don’t make stupid lists to tell other legislators how to do their jobs.

Many reading this will say, “Ah, this has-been just wrote a 1,600-word essay giving us his jewels of wisdom.”