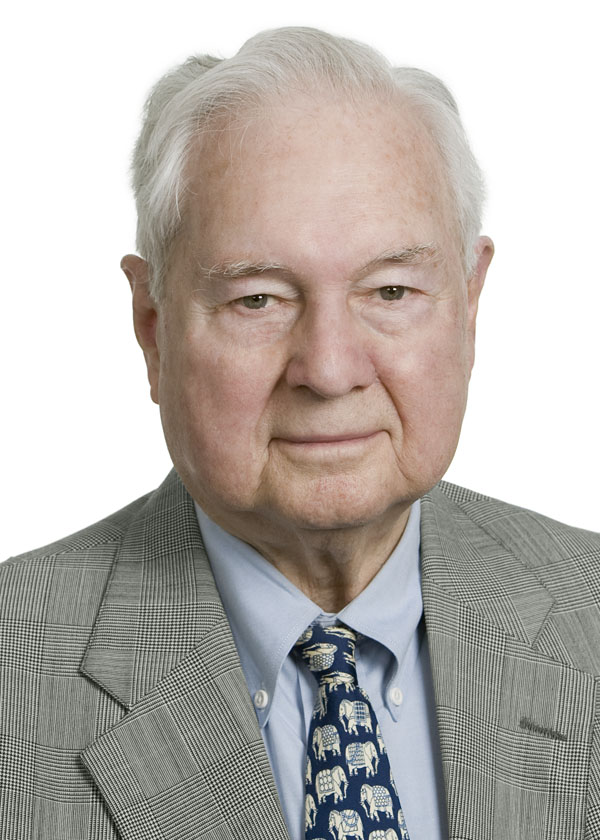 It is with great sadness that we announce the death of Howard W. Dobbins. He was 98. A beloved family man, friend and colleague, Mr. Dobbins was a transformational figure in the history of Williams Mullen. He began his illustrious legal career at the firm Wallerstein, Goode & Adamson, which eventually became Wallerstein, Goode & Dobbins, after serving in the Atlantic, Mediterranean and Pacific theaters with the U.S. Navy during World War II.

In 1986, Wallerstein, Goode & Dobbins merged with Williams Mullen to form Williams, Mullen, Christian & Dobbins. The merger provided the catalyst for the continued growth and expansion of the firm. In 1986, the merger increased the size of the firm from 30 attorneys to 45. By 1999, the firm had expanded to 140 attorneys.

Mr. Dobbins brought professional stature to the firm as well as nonpareil lawyer skills.  As a former president of the Virginia State Bar and a preeminent lawyer, colleagues and judges throughout the state respected him.  He spent more than 30 years as a steadying force and reliable source of counsel and advice, including 25 years on the firm’s board of directors.

Throughout his career, he provided legal advice to numerous banks and financial institutions, developed a reputation as an elite litigator and became well known for his experience in governmental matters. He was as fine a person and lawyer as many at the firm have ever known, and his role in the development of the firm to what it is today cannot be overstated. Mr. Dobbins will be missed by us all.

For more on Mr. Dobbins' life and legacy, click below to read articles from the Richmond Times-Dispatch and the Virginia State Bar.

See below for his full obituary published in the Richmond Times-Dispatch.

A few birthdays ago, Howard Wesley Dobbins happily announced, "Oh, what a life!" And, indeed, it has been. Howard passed away at the age of 98 on Christmas Day. Here's just a part of his story.

A towering figure in the legal profession and the epitome of an erudite, Kentucky gentleman, he rose from his modest boyhood in Louisville, where he and his older brother, Charlie, gleaned an exceptional education from the strong women who ruled the roost on Bellaire Avenue. A child of the Great Depression, Howard was entrepreneurial and frugal from the start, working paper routes, stringing tennis rackets and selling and delivering corsages for dances at his beloved alma mater, Washington & Lee University. He'd happily turn a collar or cuffs on a worn shirt by detaching and resewing them. "Just like new!", he'd proclaim.

On an athletic and academic scholarship to W&L, he worked hard, lettering in three sports and was inducted into its Athletic Hall of Fame. "Even the robins are votin' for Dobbins" a slogan which led him to victory as president of the student body, in addition to other honors Phi Beta Kappa, ODK, Order of the Coif, co-editor of the Law Review, member of Alpha Tau Omega fraternity, captain of the basketball team, All State & All Southern Conference team for basketball and football.

In just five years, Howard completed his undergraduate and law degrees, passing the Kentucky Bar after only one year of law school. But it wasn't all work and no play. A Valentine's Day first date turned into a marriage with Virginia Anne Jones, lasting devotedly for 73 years. They made great friends along the way, which they called "The Gang." "Dobby" and his buddy, AB, were pranksters who loved to scare all the kids on Christmas with the vicious mongoose in the cage.

He further entertained with quarters appearing from our ears, duets of "Heart and Soul" on the piano, harmonica tunes, dancing the Charleston, and a bawdy song involving flexing biceps and girls in France. When recently asked by a ER doctor as to the secret of such a long and healthy life, he pondered momentarily and rejoined, "A little Jack Daniels every day."

Vying for attention with his lovely wife and three children was his enduring passion for the law. His deep respect for jurisprudence led him on a lifelong journey, which lasted until the age of 95 when he put aside his legal pad and the Virginia Code for good. A word-smith and scholar, Howard excelled at his profession starting at Wallerstein, Goode & Adamson, which evolved into Williams, Mullen, Clark & Dobbins, known as Williams Mullen, having more than 230 attorneys across the region. Numerous accolades were bestowed during his legal career: President, Virginia State Bar; Member, Virginia Bar Association; Fellow, Virginia Bar Foundation, American Bar Foundation and American Trial Lawyers. A permanent member of the Judicial Council of the U.S. Court of Appeals for the Fourth Circuit, he was consistently listed as one of the Best Lawyers in Virginia, Virginia Legal Elite and Best Lawyers in America. So, as you can see, not only the robins were votin' for Dobbins.

It is with our deepest gratitude that we honor those who cared for him with such kindness and love: Nancy Gitati, Esther Gitati, Elsie Hovis and Amy Soreny. Howard was predeceased by his parents, Vivian Leon and Katharine Collins Dobbins; his wife, Virginia Anne Jones Dobbins; and her brother, L. Clarke Jones Jr.; his brother, Charles William Dobbins and his son, Howard W. Dobbins Jr. Surviving to enjoy our many memories are his daughters, Anne Brasfield (Evans), Leigh Johnson (Craig); grandchildren, Randall Heilig (Jen), Mollie Heilig Storey (Scott), Howard Dobbins III (Kristin), Carter Crenshaw, Liza Crenshaw; as well as great-grandchildren, Lucy and Daisy Storey, Preston and Charlie Heilig, Camdyn and Kash Dobbins; and beloved nieces and nephews.

In lieu of flowers, the family asks that you consider a donation to the Virginia Home for Boys & Girls or Second Baptist Church (River Road and Gaskins). Visitation for family and friends will be held at Bliley's - Central, 3801 Augusta Ave., 4 to 6 p.m. on Wednesday, December 27, 2017. After a private burial, a memorial service will be held at 12 noon on Thursday, December 28, 2017, at Second Baptist Church.