Primary elections were held across the state yesterday, as North Carolinians cast their ballots for various local, state and federal races. Originally scheduled for March 8th, the primaries were postponed by the North Carolina Supreme Court as part of the litigation challenging the new legislative and congressional maps approved by the North Carolina General Assembly. The North Carolina Supreme Court, in a 4-3 opinion that broke along party lines, rejected all three of the original maps and ordered the Republican leaders in the state legislature to redraw them. The replacement maps for the state House and state Senate were approved, but a three-judge panel rejected the redrawn congressional map and adopted an interim congressional map that will be used for the 2022 elections only.

Click here or on the image below for a complete summary. 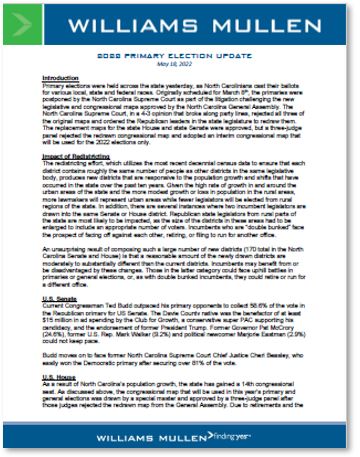