What follows is a background on the redistricting process and the associated litigation. We also provide an overview of the new districts, with the caveat that the new maps are subject to change depending on the results of the litigation. We will also discuss how the new maps will influence the composition of the General Assembly and the congressional delegation and how this could impact policy decisions for the next decade.

Redistricting is required every ten years to ensure that each district contains roughly the same number of people as other districts in the same legislative body. The most recent decennial census data are used as a part of the process. As a result of North Carolina’s population growth, the state will gain a 14th congressional seat. In North Carolina, redistricting legislation is not subject to a gubernatorial veto. The newly drawn maps are to be used for the next decade.

Redistricting committees held more than a dozen public hearings across the state and in Raleigh to receive citizen input. When drawing the new districts, legislators did not use racial or political data and in most cases, and where feasible, chose to keep counties whole and avoided splitting municipalities. The General Assembly approved new state House and Senate district maps and a congressional district map on November 4th, with each map approved by a party-line vote.

Candidate filing was set to begin on December 6th, and primaries were scheduled for March 8th next year. As in years past, the legislative redistricting process has generated efforts by groups affiliated with the minority party to have courts invalidate the new maps. For example, the maps drawn after the 2010 census by the Republican-led legislature were ruled unconstitutional due to racial gerrymandering, and the maps that replaced them were ruled unconstitutional due to partisan gerrymandering.

This year, the NAACP and Common Cause, an anti-gerrymandering government watchdog group, filed a lawsuit before new maps were adopted asking a judge to stop the process and to postpone the 2022 primary elections until next fall so that a redistricting process could take place under new rules. This challenge to the process ultimately was denied.

In addition, within a day of the legislature’s adoption of the new congressional map, a group affiliated with former U.S. Attorney General Eric Holder, the National Democratic Redistricting Committee, backed the filing of a lawsuit asserting that the new congressional map is partisan gerrymandering and violates several provisions of the North Carolina Constitution. Another case, brought by the state League of Conservation Voters and various individuals, asserts that both the legislative and congressional maps are racial and partisan gerrymanders. Both of these cases were brought in state court, presumably because the United States Supreme Court has recently ruled that partisan gerrymandering claims present political questions beyond the reach of the federal courts.

On the morning of December 6th, a panel of three judges on the North Carolina Court of Appeals initially issued a temporary stay halting candidate filing, which was scheduled to start at noon that day. However, that evening the full court vacated the stay, and candidate filing was allowed to proceed. As background, Republicans have a ten to five majority on the Court of Appeals.

The North Carolina Supreme Court, in response to requests from the plaintiffs in the two substantive gerrymandering cases, issued an order on December 8th temporarily staying candidate filing. This order moves all primaries, not just the ones that would use the new legislative and congressional maps, from March 8th to May 17th. The order also establishes a timeline for consideration of the consolidated cases, with the trial court (a panel of three superior court judges) directed to rule on or before January 11th. Arguments are scheduled to be heard in Wake County Superior Court January 3rd through January 5th, with closing arguments on January 6th. Any party wishing to appeal the ruling to the North Carolina Supreme Court will have two business days to do so, and the order makes clear that there will be an expedited briefing and hearing schedule for any appeal. The takeaway from the expedited litigation schedule and delayed primaries is that the North Carolina Supreme Court, which has a four to three Democrat majority, intends to allow the legislature enough time to redraw districts if the maps are found to be unconstitutional.

Why Redistricting Matters and Key Takeaways

Congressional Delegation Composition and Control of the General Assembly

The most obvious and important impact of any new map is its influence on the outcome of elections and therefore control of legislative bodies. Analysis of the new maps by election experts indicates that Republicans could very well increase the number of their seats in the North Carolina Congressional delegation as well as in the state legislature. Picking up congressional seats in North Carolina would assist the Republicans in retaking control of the US House of Representatives. At the state level, increasing the number of Republicans in the North Carolina Senate and House would potentially provide a veto-proof majority (three-fifths of each chamber). Republicans would need to pick up three seats in the House and two in the Senate to reach that threshold, which would allow them to override vetoes of Democrat Governor Roy Cooper.

More Urban Seats in the Legislature

Given the high rate of population growth in and around the urban areas of the state and the more modest growth or loss in population in the rural areas, more lawmakers will represent urban areas while fewer legislators will be elected from rural regions of the state. This shift could very well have an impact on the policy decisions made on Jones Street.

As a result of these population changes in North Carolina, there are several instances where two incumbent legislators are drawn into the same Senate or House district. Republican state legislators from rural parts of the state are most likely to be impacted, as the size of the districts in these areas had to be enlarged to include an appropriate number of voters. Incumbents who are “double bunked” face the prospect of facing off against each other, retiring or filing to run for another office.

An unsurprising result of the process of composing such a large number of new districts (170 total in the North Carolina Senate and House) is that a fair amount of the newly drawn districts are moderately to substantially different than the current districts. Incumbents may benefit or be disadvantaged by these changes. Those in the latter category could face uphill battles in primaries or general elections, or, as with double bunked incumbents, they could retire or run for a different office.

Due to the state’s significant population growth over the past decade, North Carolina gained a congressional seat. The current composition of the North Carolina Congressional delegation is eight Republicans and five Democrats. The general consensus of election experts is that, of the 14 new districts, eight are safe Republican seats, three are safe Democratic seats, and three are competitive seats. With respect to the toss-up seats, two lean Republican and one leans Democrat, which could result in a Republican-Democrat balance of ten to four.

Congressional District 1: Gregory Murphy (R) is the incumbent and will be favored in this strong Republican district.

Congressional District 2: Incumbent G.K. Butterfield (D) has announced that he will not seek reelection, perhaps in some measure facilitated by the fact that this new district is projected to be the most competitive of all 14 districts.

Congressional District 4: The new 4th seat is open and is comprised of Johnston, Harnett, Cumberland, Sampson and parts of Wayne. This seat could be competitive, and State Representative John Szoka (R) and former Fayetteville mayor Nat Robertson (R) intend to seek this position, as does State Senator Ben Clark (D).

Congressional District 5: Deborah Ross (D) has a favorable seat for a Democrat.

Congressional District 6: This new seat is open and includes Orange, Durham and parts of Wake counties. It is an overwhelmingly Democrat seat, and State Senators Wiley Nickel (D) and Valerie Foushee (D), among others, have announced their intention to run.

Congressional District 7: This is a new open seat favoring a Republican and includes Lee, Chatham, Alamance, Randolph and parts of Wake, Guilford and Davidson counties.

Congressional District 8: Technically, this is an open seat, but current 9th District Congressman Dan Bishop (R), who is double bunked in the 9th with Congresswoman Alma Adams, announced his intention to run in the new 8th District. The new 8th contains a significant portion of the current 9th, represented by Bishop. Although it is not a requirement that a candidate for the US House live in the district, Bishop’s staff confirmed that he plans to move to the new district.

Congressional District 9: Alma Adams (D) should have no problems in a heavily Democrat district.

Congressional District 10: The new 10th is a strong Republican district which favors incumbent Richard Hudson (R). Congressman Ted Budd (R) also resides in this district, but he is running for the US Senate seat currently held by Sen. Richard Burr (R).

Congressional District 11: Virginia Foxx (R) and Kathy Manning (D) are double bunked in this new district, which is solid Republican.

Congressional District 13: In a major and surprising development, Congressman Madison Cawthorn (R) announced that he would not run in the 14th District where he lives, but instead that he would seek the 13th District seat. The 13th is an open seat and includes the residence of North Carolina House Speaker Tim Moore (R), who was expected to run for the seat. However, after Cawthorn’s announcement, Moore announced he wouldn’t run and, instead, would seek re-election to the N.C. House. The district is a solid Republican district.

Congressional District 14: Located in the far west of the state and comprised of 14 counties and parts of one other county, this seat could be competitive. 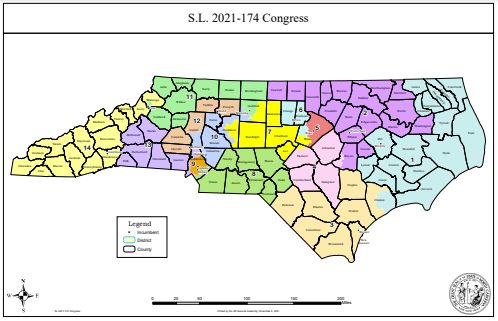 A link to the NC Congressional District map can be found here.

There are 50 seats in the North Carolina Senate where Republicans currently maintain a 28-22 advantage. Political analysts peg the number of strong or lean Republican seats somewhere between 23 to 26, with five to eight other districts falling into the competitive category. The GOP would therefore appear to be well positioned to maintain its majority and, perhaps, to capture a super majority. 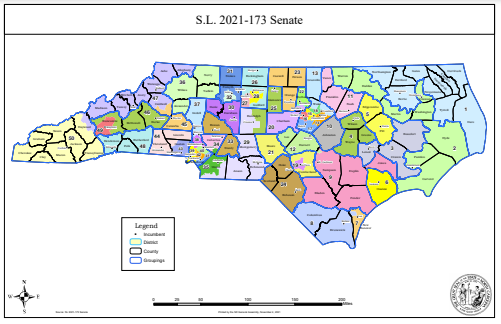 A link to the NC Senate map can be found here.

Republicans hold 68 of the 120 seats in the House. Election experts estimate that Republicans are favored in 55 to 57 of the districts and that 22 to 24 are considered competitive. Similar to the Senate, Republicans are poised to maintain their majority and have a reasonable chance of capturing a super majority. 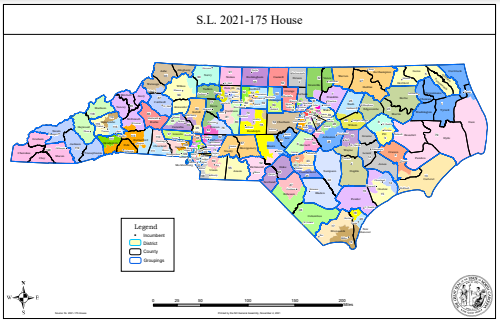 A link to the NC House map can be found here.