Click on the image below for a full PDF of the Construction Industry Newsletter. 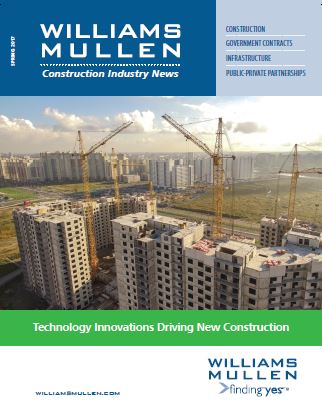 Publications such as Best Lawyers in America, Chambers USA, Legal Elite, Super Lawyers, and The International Who’s Who of Construction Lawyers have recognized members of the Williams Mullen Construction Practice Group among the best when it comes to construction and surety matters.

Our attorneys have written chapters for various publications, such as the ABA Forum book, Federal Government Construction Contracts, and the Virginia Construction Law Deskbook, and had published in Engineering News Record, Construction Claims Advisor, and the Construction Law and Public Contracts Virginia State Bar Newsletter, in addition to contributing to numerous papers, making presentations and leading seminars at the invitation of construction industry groups and legal organizations.

The clients of the Construction Practice Group have yet another advantage with Williams Mullen that a limited practice law firm cannot provide.  As a client, your legal issues are not always restricted to one area of law practice, and for your benefit, the law practice areas of Williams Mullen are not limited.  When you engage Williams Mullen, you immediately have access, if and when needed, to over 30 legal practice areas and approximately 230 attorneys from our offices in Virginia, the District of Columbia, and North Carolina.

Our Construction Project Portfolio Is Vast and Varied

In four decades, our attorneys have been engaged in many projects. The following list provides examples from our Project Experience Portfolio. These projects have included new construction, demolition, rehabilitation and historical renovation.

Click on the image below for a full PDF of the Construction Industry Newsletter.

CASE RESULTS DEPEND UPON A VARIETY OF FACTORS UNIQUE TO EACH CASE.  CASE RESULTS DO NOT GUARANTEE OR PREDICT A SIMILAR RESULT IN ANY FUTURE CASE UNDERTAKEN BY THE LAWYER